First of all, Visual Studio Tools for Apache Cordova CTP3.x are not longer supported in Visual Studio 2013 in the first place. If you try to install Update 5 it will prompt you to remove it before continuing. 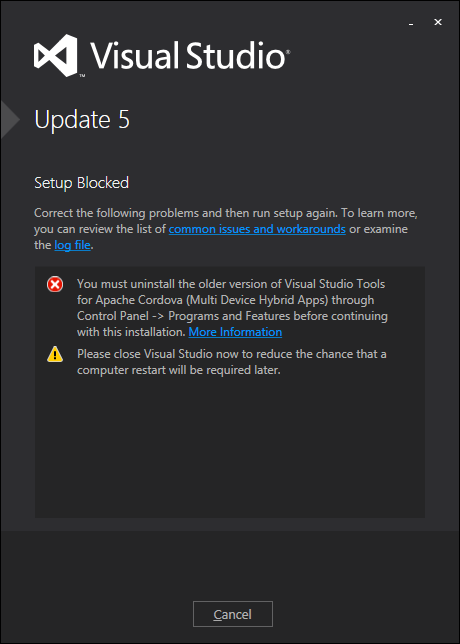 This is explained in the release notes for Update 5.

The options for those developing with the VS tools for Apache Cordova in VS2013 are either to switch to Visual Studio 2015 or not install the last update and continue to work with CTP 3.x in VS2013.

In this article I will show you how to migrate a Cordova application from VS2013 to VS2015 and I will exemplify with a test application.

I have this app called TestApp. It’s built with Ionic and AngularJS. It is a JavaScript app, not a TypeScript app, but this works just the same regardless what language you use. It has the following project structure, with the Javascript source code in a folder called app, the libraries in libs and the templates in views. There are other folders apart from the ones VS has created, mainly css and images.

The application is just a test, it doesn’t do anything but it works for both Android and iOS.

You have to covert it manually in order to make it available for Visual Studio 2015. Fortunately, the steps to do this are documented, but not in MSDN as one might expect, but on GitHub. There is a document called Known Issues – Visual Studio 2015 that explains what has to be done.

If you open the project again in Visual Studio 2015 it will work and you can build and run it. For my test application the new project looks like this. 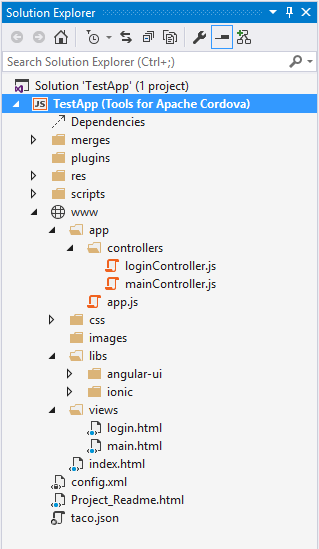 You can see that the all the folders and files under the www folder appear automatically in the solution explorer. They are not added with a Content or Folder element in the .jsproj file. You can make a comparison of the old and new .jsproj and see how simplified the new file is. 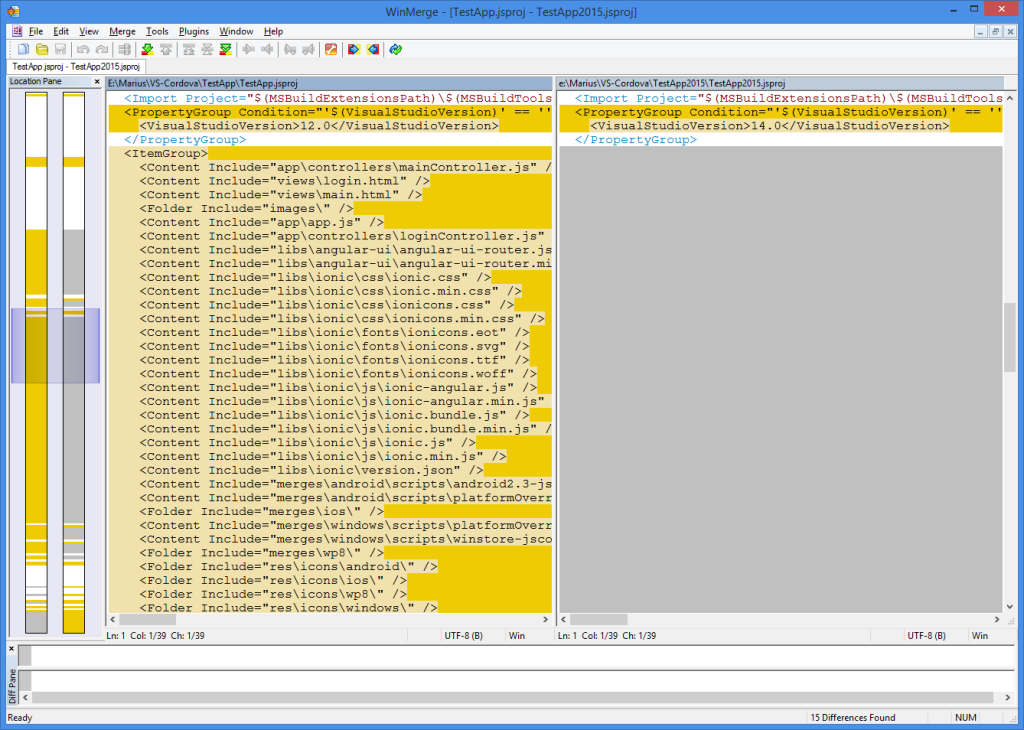 However, when I tried to build I got the following error:

This might have been related to the version of Apache Cordova I had globally installed, i.e. 5.1.1. If you get the same install it via npm.

However, you may still get problems when you try to build for Android.

MSBUILD : cordova-build error BLD10205: Please install Android target “”
You may not have the required environment or OS to build this project
MDAVSCLI : error : cmd: Command failed with exit code 2

The Android target name is empty, but if you do a Rebuild you get more information and actual required target name:

These can be installed using the Android SDK Manager. Make sure you select all the mentioned components.

With these changes you can build successfully for Android.

One more thing here is the version of Apache Cordova used by vs-tac to build. vs-tac uses Cordova 4.3.1, but I already had Cordova 5.1.1 installed on my machine and used by vs-mda. If you have a newer Cordova version than 4.3.1 what you have to do instruct vs-tac to use this one in the taco.json file.

Replace the version 4.3.1 of the cordova command line interface with desired version (in my case 5.1.1). When you rebuilt it will install it and build with it.

You can find the various Cordova versions installed under %APPDATA%\npm\node_modules\vs-tac\node_modules\cordova. 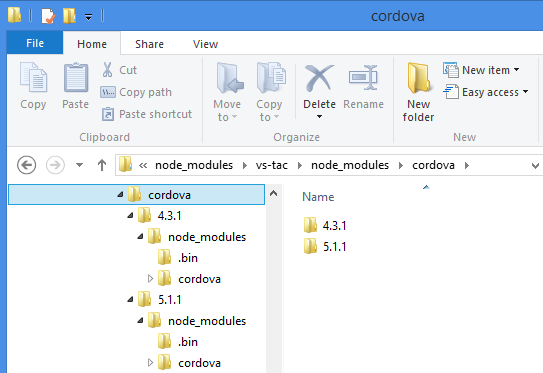