I have played recently a great game on Android, called Alchemy, created by Andrey Zaikin. You start with four basic elements, Fire, Water, Air and Earth and you can combine them to get more and more elements. The game was so catching that after finishing it I decided to write my own version for Windows. I chose WPF because I wanted to learn it and because I realized the stuff I wanted to create was too hard to do in MFC. This is my first real application in WPF, and what you see is the result of 4 days of work; in MFC it could have been 4 months, I believe. 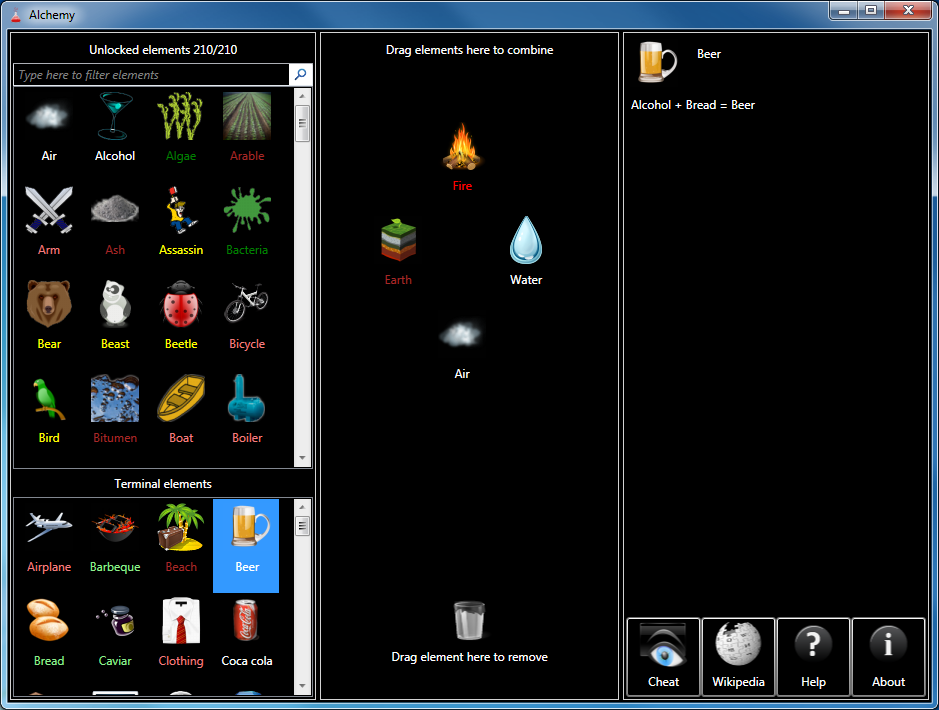 You start with the four basic elements: air, earth, fire and water. You can combine them by dragging onto each other on the central area of the window, “the desktop”. When new elements are created they are added to one of the two lists from the left area. The top list has elements that can be combined again. The bottom list contains terminal elements, i.e. elements that can no longer be combined. You can drag elements from the non-terminals list back to the desktop area, but not from the terminals list.

When the number of elements gets too big scrolling through the list might be cumbersome. You can use the search textbox to filter the elements in the list. As you type only the elements that contain the typed text are displayed. It you press the X button of the textbox or clear its content, the list displays again all the unlocked elements. 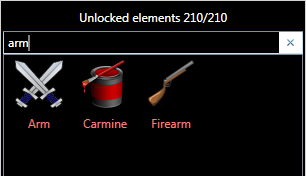 On the right area of the window you find a help pane. When you select an element from one of the two lists on the left side, you can see a list of all the unlocked combinations in which the elements appears (either as input or output).

There are also several buttons: Cheat, Wikipedia, Help and About. Button Cheat opens a new window that displays the list of all available elements. So if you get stuck and don’t know what elements are left to discover you can cheat and see the list. 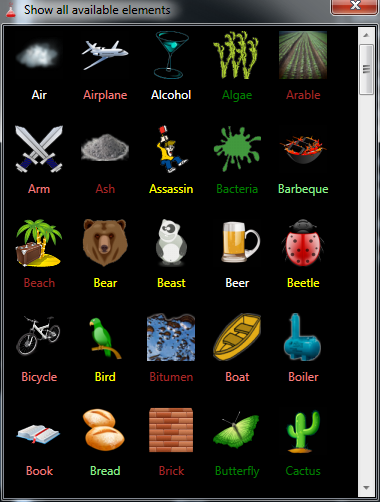 Button Wikipedia starts a search on Wikipedia for the currently selected element. Buttons Help and About display information about the game.

Here is the alphabetical list of all the 210 elements available in version 1.0:

215 Replies to “Alchemy for Windows”